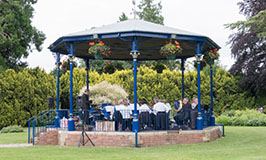 The History of Bicester Concert Band

Bicester Concert Band started life as 'No Strings Attached' in 1996 when a small group of keen musicians, supported by Bicester’s Adult Education Centre, began meeting in a cookery room at The Bicester School (or, as it was called then, Bicester Community College). They were soon lucky enough to recruit the services of Trevor Jones as their conductor. He was a local music teacher and a former member of the RAF central band. Under his leadership the band went from strength to strength and soon outgrew the school cookery room.

A change of name to Bicester Concert Band, and a change of venue to the delightfully refurbished St Edburg’s Church Hall heralded further growth for the band, which became a regular feature at local civic events. A link with Bicester Choral and Operatic Society was established, and joint Christmas Concerts in a candle-lit St Edburgs Church were a highlight of the Band’s year.

After conducting the band for 10 years, Trevor left to move to new projects in 2006. It was with great relief that an equally inspiring conductor was found to take the band into its second decade. Philip Burditt conducted the band until 2017.

The band is currently led by Wendy Marks, and is enjoying something of a revival under her leadership. New members are joining and standards are raising as the band works hard to improve its ensemble playing.

The band is also benefitting from a change in venue to the school hall at the recently built St Edburg’s School on Kingsmere. Band members enjoy playing in the larger, acoustically better, modern space.

How to find us

St Edburg’s School is located on the Kingsmere development in Bicester. From the A41, turn into Pioneer Way just by the Premier Inn. Stay on Pioneer Way; the school will be on your left.