Here are a couple of photos that were taken of the band at our concert last night. It was lovely to have so many of our friends and family as well as ex-members in the audience. We hope you enjoyed the evening as much as we did! 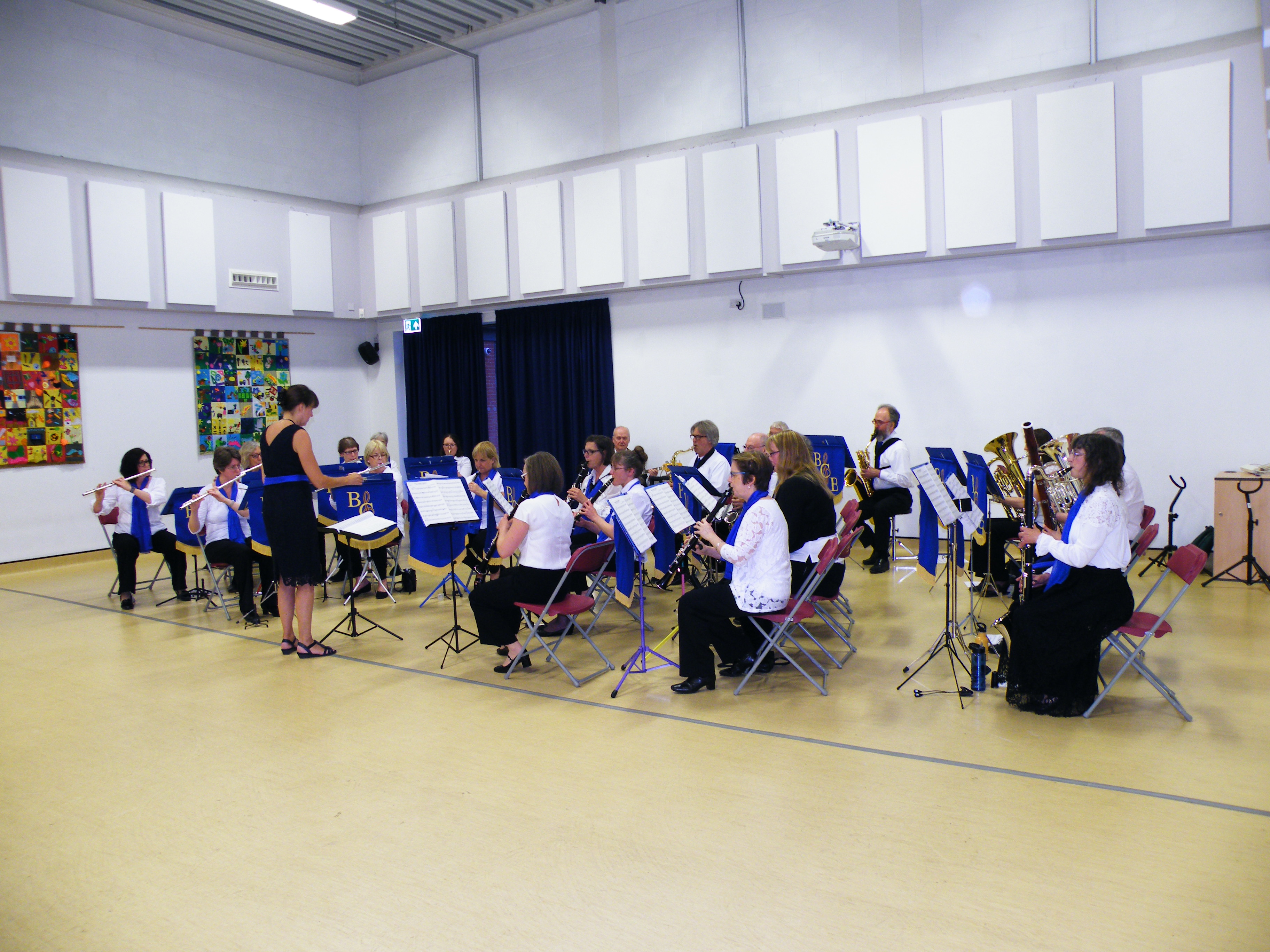 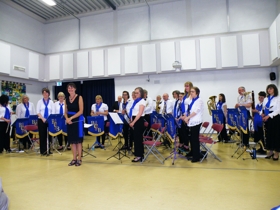 Amy Sapwell, who attended the concert,  reviewed our performance:


On Saturday 12th May, Bicester Concert Band performed their first concert under the baton of Wendy Marks.  A brave choice of date, as they competed for audience against the Eurovision Song Contest!

But there was no competition.  The audience were serenaded with a wide variety of musical genres ranging from Mozart's elegant Magic Flute to the zany Looney Tunes. From the world of musicals we heard Carmen, My Fair Lady, Grease and Fiddler on the Roof.  It was a struggle for the audience to stop themselves clapping, singing and dancing along to the lively tunes.

An excellent performance and hopefully the first of many as the band grows from strength to strength.

Thank you for your kind words, Amy! 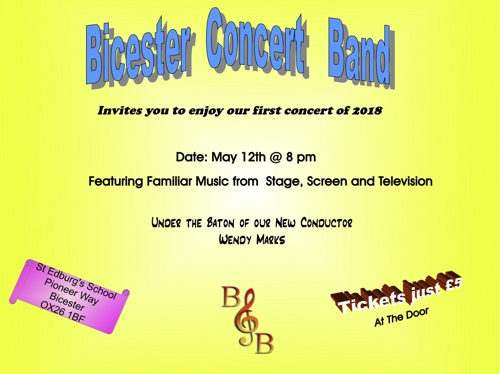 We are busy rehearsing for our first concert this year - and our first concert since Wendy had taken over as conductor. It will take place in St Edburg's School, at 8pm on Saturday 12th May. Tickets cost £5 for adults (children are free) and can be bought from band members, or on the door.

We have been improving and growing week by week since Wendy joined us, and at our rehearsal on Tuesday we were sounding pretty good. It's going to be great to share the fruits of our labour with an audience.

Here is a photo that I took of our growing band at Tuesday's rehearsal. We now have well over twenty members, and we're still attracting new players. 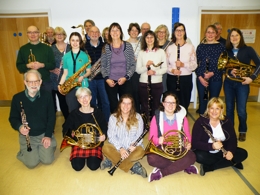 A few of our members visited Bubbles Preschool. The children were amazed to hear the instruments
and they loved singing along to some nursery rhymes. We enjoyed sharing our music with them too.

Here are some pictures of the growing band taken a couple of weeks ago: 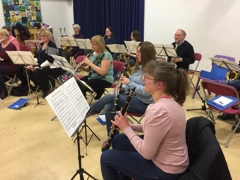 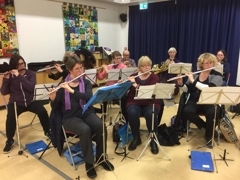 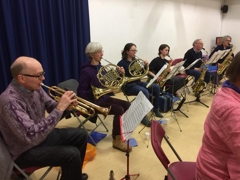 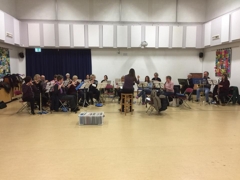 You can see Wendy, our fabulous conductor; our bari sax and bass clarinet section; our clarinet and oboe players; the extensive flute section; our brass players and all of us playing to a box of music!

We are pleased to announce that Wendy Marks has agreed to become our new musical director. All the members of the band were thrilled with the rehearsals that she led in December and we lost no time in offering her the job. We are looking forward to moving forward under her direction, to attracting more players and to becoming bigger and better!

We are also excited to have established links with Stewart Drummond. The rehearsals that he conducted were pacy, challenging and thoroughly enjoyable. Stewart spends time in Africa working for the charity ‘Brass for Africa’, so he isn’t able to commit to conducting us all year round. He will, however, be happy to help us out in the future if Wendy is away, and if he is available.

During December we played a couple of festive gigs. We played carols for shoppers in Sainsbury’s on Sunday 3rd, and we played for the Christingle Service that was held at St Edburg’s School on Sunday 17th December for the people of Kingsmere. We were planning to play carols for shoppers at Tesco too, on Sunday 10th December, but the snowy weather put paid to those plans – it caused a power cut that closed the store!

We ended the term with a Christmas meal out at the White Horse in Bicester where we said farewell to Philip. We will miss him, but we will stay in touch, and we wish him all the best for the future.

Towards the end of October Philip, our conductor of 10 years, decided to step down from the position. While we are missing his leadership, we are pleased to hear that his Tuesdays have become more relaxed, and he is enjoying being able to devote more time to family commitments.

So, for the first two rehearsals of November we changed our format slightly to be able to manage without Philip. We set up in a circle, and worked hard on listening to each other even more carefully than normal to be able to play together well. We were lucky that Sue, one of our flautists, did a great job of bringing us in and keeping time for us, and we really enjoyed the challenge of working out for ourselves what we should play and how we should play it.

We are now in the process of looking for a new Musical Director - someone with experience of conducting community bands who can take Bicester Concert Band from strength to strength.

Last week we were pleased to welcome Wendy Marks along to lead our rehearsal. It was great to work hard on improving pieces that we thought we knew quite well. By the time we went home, we were making a much nicer sound than we had at the start of the session.

Wendy will be leading the next two sessions, and then in December we will be welcoming Stewart Drummond into the hot seat; he will conduct us on 5th and 12th December.

We played two gigs in July, both in glorious sunshine.

The first gig was in The Garth Park on Sunday 2nd July on the refurbished band stand. We always enjoy making use of this elegant structure and we were very comfortable playing in the shade that it affords. Our audience, however, felt the heat and took shelter from the sunshine under the branches of a huge old cypress tree just behind us. It didn't feel right to have our backs to the audience so, in our half-time break we shuffled the band around by 90° so that we could keep the audience in our sights!

On Saturday 7th July we played at the Fritwell History Festival. As we were setting up, the sound of musket shots and cannon fire was ringing in our ears as the Sealed Knot were putting on an amazing display in the main arena. Once they had finished we settled down to play some of the repertoire that we have been rehearsing lately, stopping for an all important half-time break which allowed us to invade the tea-tent and devour some of the delicious cakes that were on sale!

We were very lucky that the talented photographer Peter Greenway was at the Festival and was able to take some photographs of us to record the event. 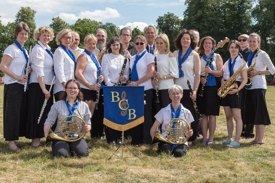 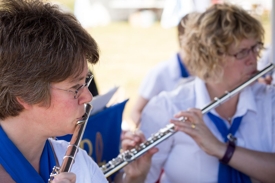 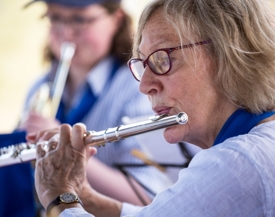 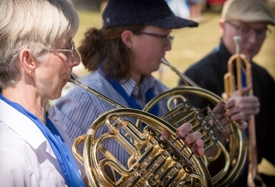 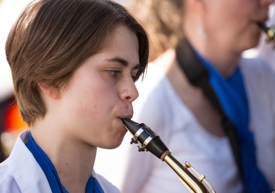 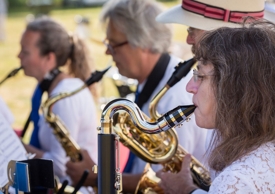 The band was asked to take part in the Healthy Bicester Launch in Sheep Street. We enjoyed playing for local residents who came along to find out more about this new initiative. Here are two of the pictures that were posted by the Healthy Bicester team on their facebook page. 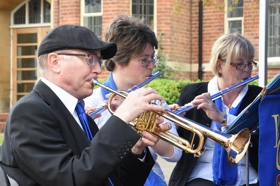 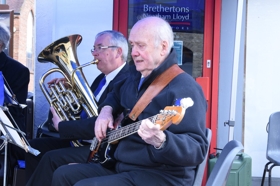 Bicester Concert Band has members of all ages. One of our younger members, Caitlin, is currently working towards a BTEC level three extended diploma in music. We were very pleased when Caitlin asked us if we would be able to accompany her playing as a soloist for one of the modules on her course. We spent a few weeks preparing for this with her, and spent a final session recording her performance. She played the slow movement of Mozart’s clarinet concerto (a beautiful arrangement by Philip Burditt, our musical director), Cruella De Vil by Mel Levin and arranged by John Moss, and an arrangement by Alan Fernie of the traditional song Joshua Fought The Battle Of Jericho.

We are now preparing for our summer gigs.

On 13th May we will be playing in Bicester Town Centre at an event staged by The Health Towns initiative. We will play in the morning to keep runners and their supporters entertained as they prepare for a fun run.

On Sunday 2nd July we will be playing on the band stand in Garth Park. The bandstand is in the process of being refurbished; the floor is about to be repaired and it has already been repainted. We always enjoy playing on this lovely bandstand in such a picturesque park and we can’t wait to celebrate the bandstand’s smart new look.

On Saturday 8th July we are playng at Shelswell History Festival which is taking place just north of Fringford and Hethe on the Shelswell Estate. As well as listening to Bicester Concert Band, you will be able to see a variety of other attractions including military vehicles from two world wars, Saxon and civil war re-enactments, demonstrations of stone walling, talks on local and world history, and plenty more besides!

Our website was redesigned by the talented Sam Isaacs. We hope you like the new-look site and find it interesting and informative.

In the run-up to Christmas we got into the festive spirit by playing carols for shoppers in Bicester Avenue and at Tesco’s. We also performed and informal Christmas concert for family and friends at our last rehearsal of the term, and had coffee and cake to finish the evening. Our last engagement of the year was to provide the music for a Christingle service that was held at St Edburg’s School for the residents of Kingsmere.

After a well-earned break, we are now enjoying a return to our Tuesday evening rehearsals and we are working on new and challenging music for our spring engagements.

Do contact us if you would like more information about booking the band (we are available for bookings all year round) or about joining - come along and try us out for a month to see if we are what you are looking for. You'll find us friendly and welcoming.

Happy New Year from all in the band!